In Crimea, four orphaned baby squirrels were adopted by a cat

Another beautiful story which proves to us that the maternal instinct has no limits. 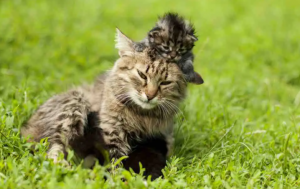 Indeed, in an animal park located in Crimea ( Bakhchisaray park ), a cat has taken under her wing four orphan baby squirrels, and takes care of them as if they were her own young.

It was visitors who brought these four babies in a box to Bakhchisaray Park.

The caretakers then decided to entrust them to a cat who was already breastfeeding her own young. And it turns out that it worked wonderfully since she took care of it right away, like it was her own little ones. Check out the touching video below.