It all started when Leanne Lauricella went shopping at Marshalls before Halloween. She was browsing the aisles when something caught her eye – a child’s duck costume, complete with a big orange bill and two webbed feet. 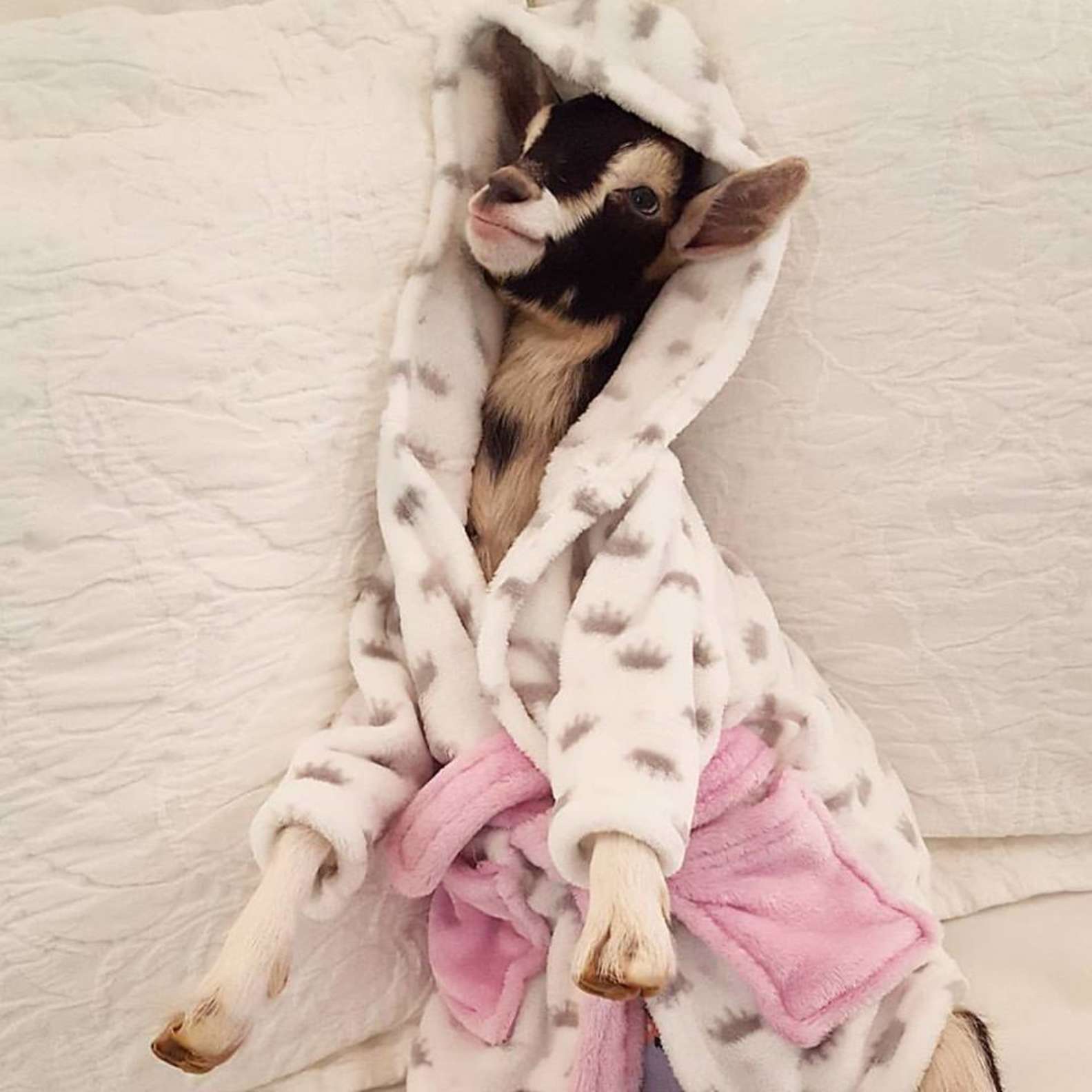 Lauricella runs a goat rescue group called Goats of Anarchy in New Jersey. She thought the duck costume would look cute on her baby goats, especially the newest rescue goat named Polly. So she bought the costume and took it home, not thinking too much of it. Little did Lauricella know just how much Polly would love that duck costume.

Polly is a baby goat with serious medical issues. She’s blind, has neurological problems that affect her eating ability and is severely underweight for her age. She also suffers from anxiety. 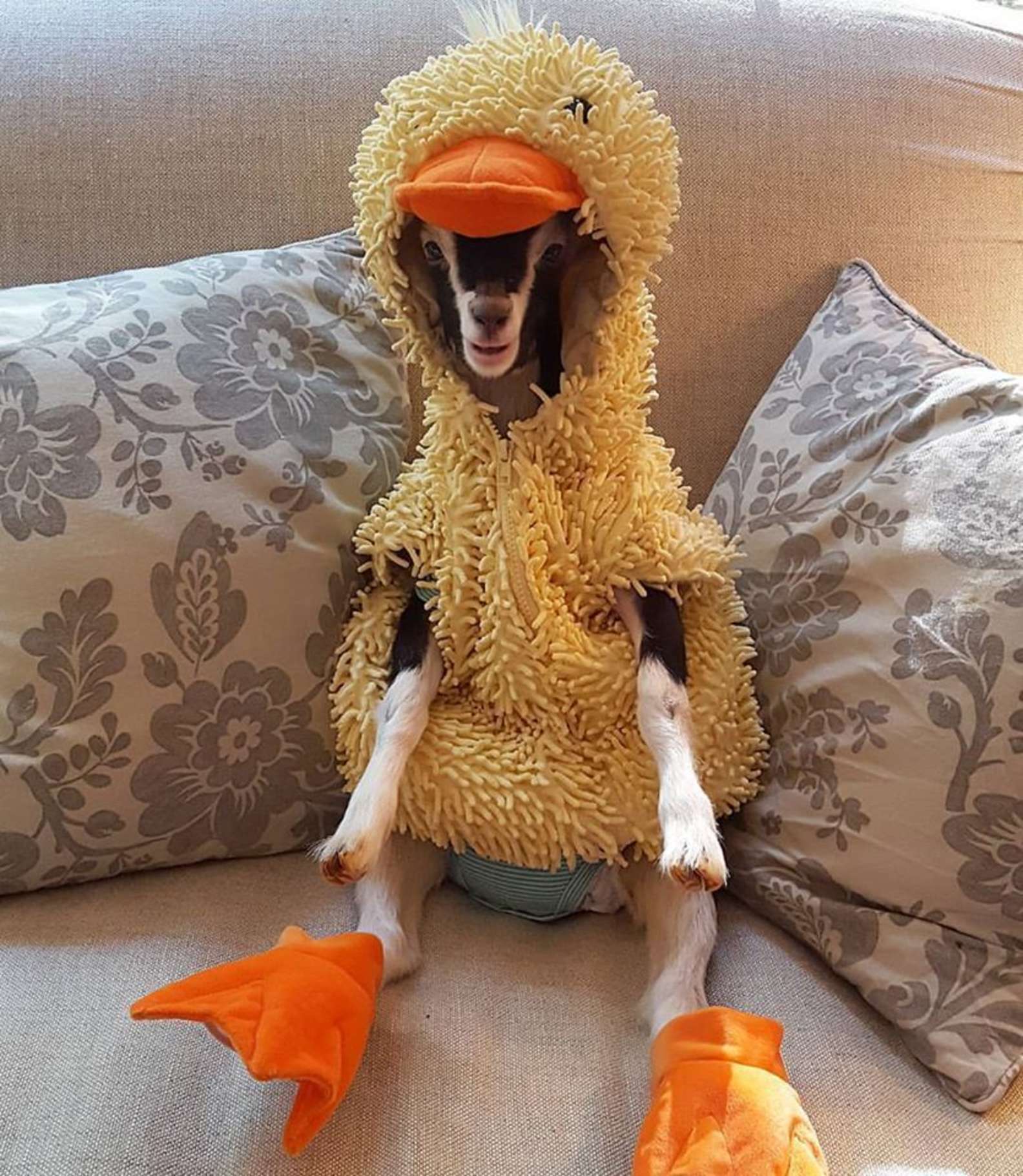 When Polly can’t find Lauricella, she frantically runs around the house, crying her heart out. Polly also has some weird habits, which Lauricella thinks are linked to her anxiety issues. “She’ll find a corner of a wall in the house, and she’ll just start sucking on the wall,” Lauricella told The Dodo. “So all the corners in our house have these little suck marks from her mouth.” 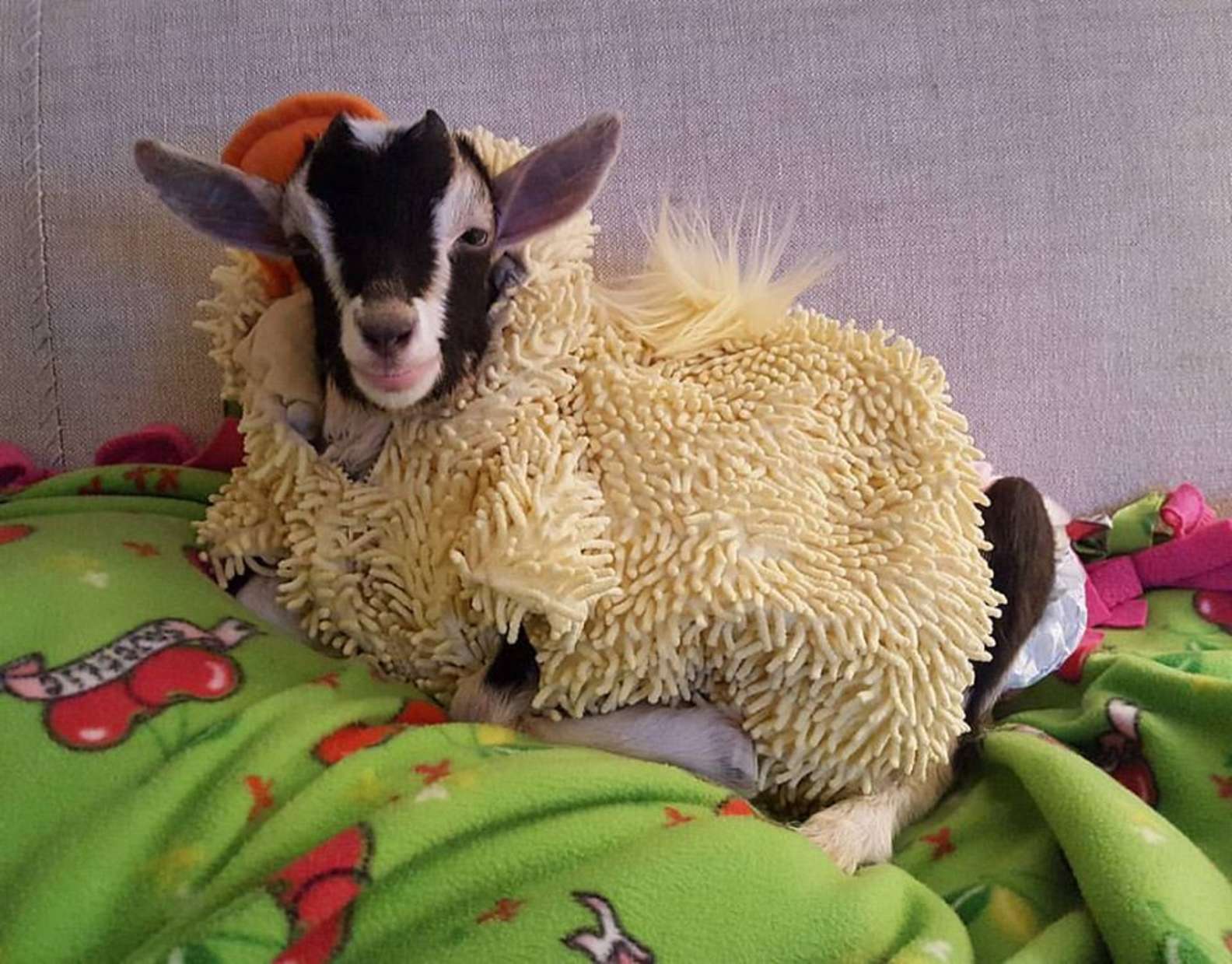 When Lauricella put the duck costume on Polly for a photo, something amazing happened. “As soon as I put it on her, she just instantly got calm,” Lauricella said.

The duck suit seemed to have the same calming effect as a ThunderShirt, or being swaddled in a blanket. But for Polly, the duck costume worked better than anything. “I tried a ThunderShirt – it didn’t work,” Lauricella said. “There’s something about that duck costume that calms her. She goes into a little trance. She just closes her eyes and she’s out.” 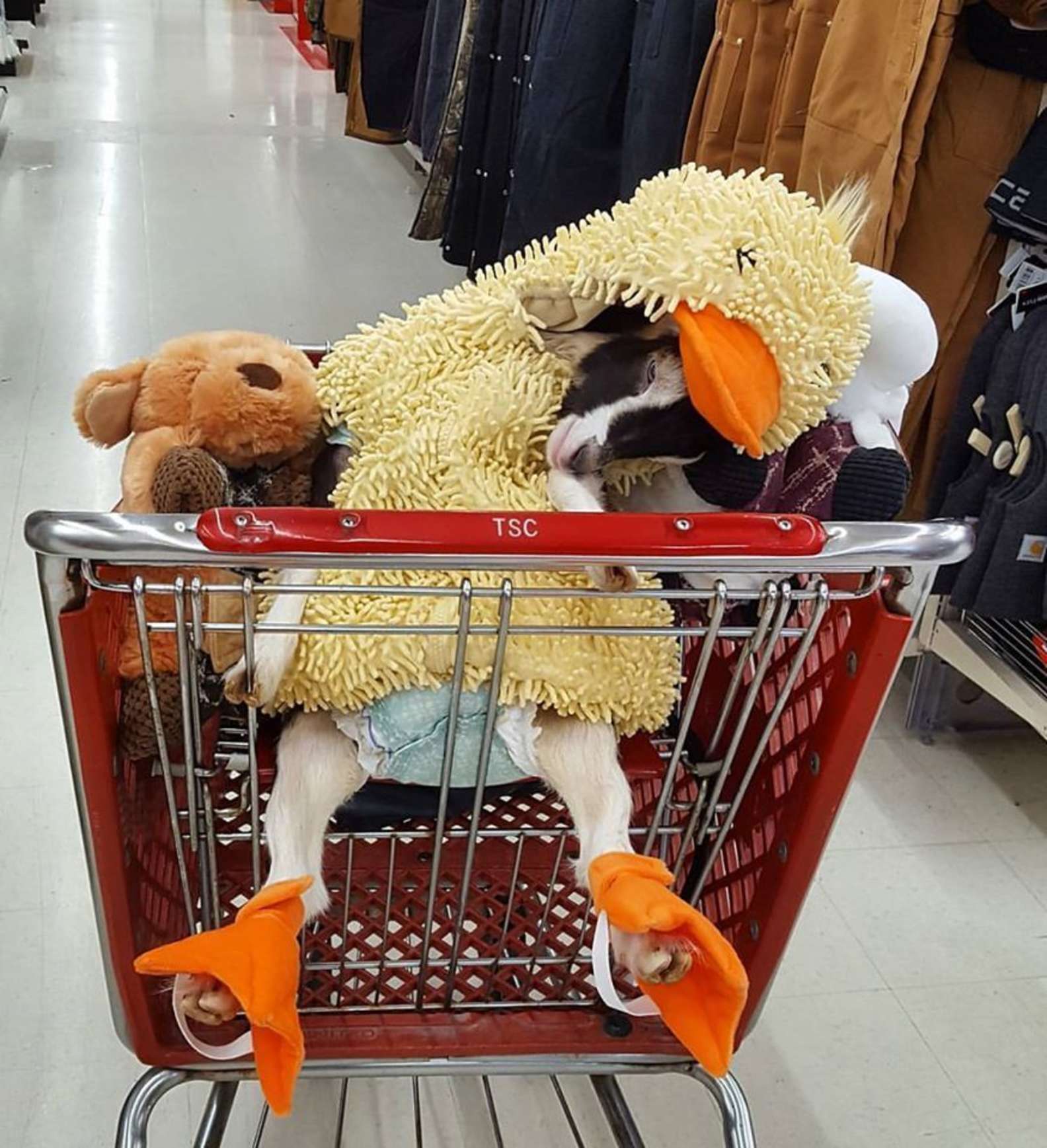 Now, whenever Polly has an anxiety attack, Lauricella puts her into the duck costume, and voila – instant calm. “She just calms down and goes to sleep,” Lauricella said. “Instantly. It’s become a thing that she’s known for.” 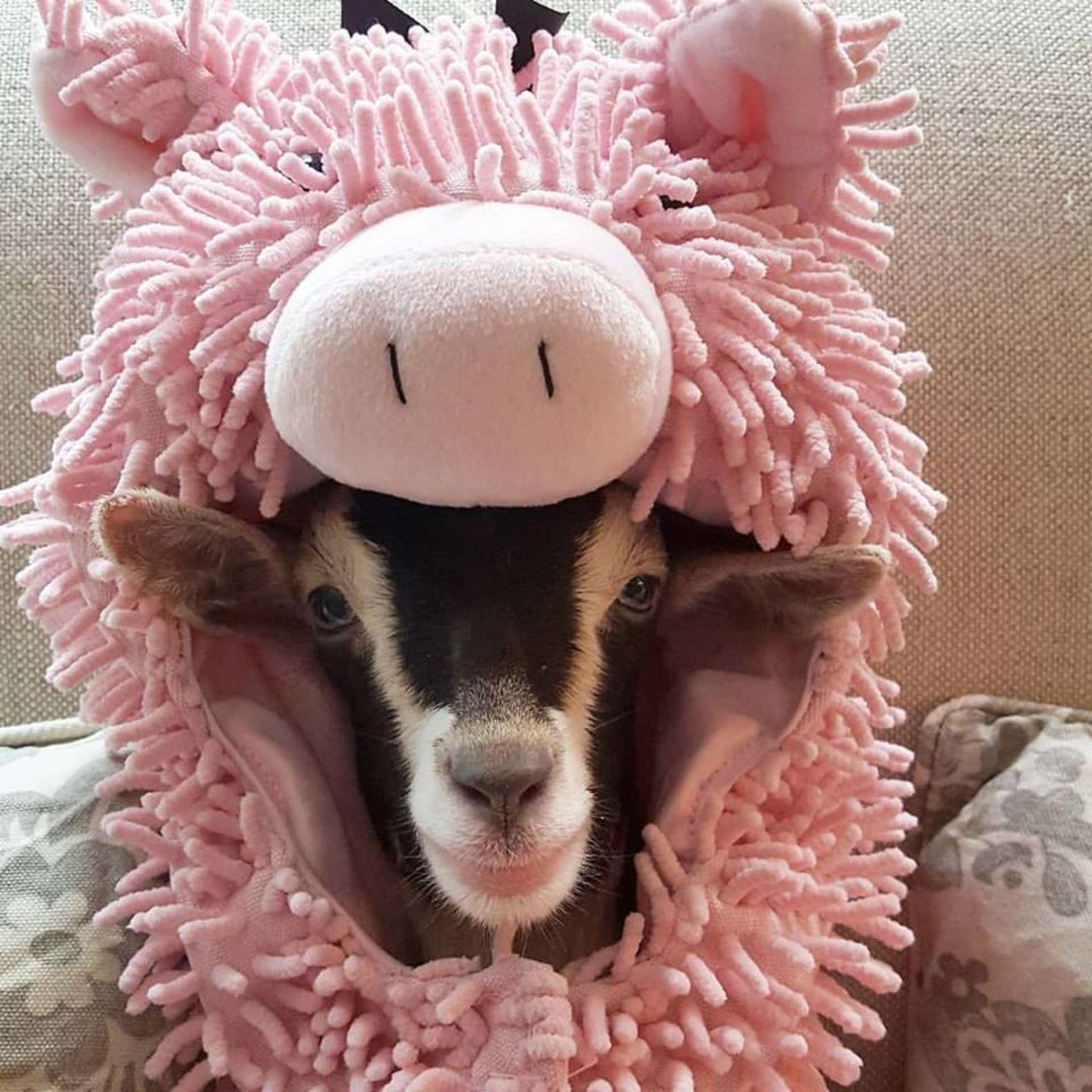 The duck costume is also useful when Lauricella has to run errands, but can’t leave Polly alone at home. When Lauricella once stopped at a local store, she put Polly into her duck suit, and the little goat snoozed in the shopping cart.

Other costumes seem to have the same calming effect on Polly, including a pig costume and a fox costume. But the duck costume remains Polly’s favorite. 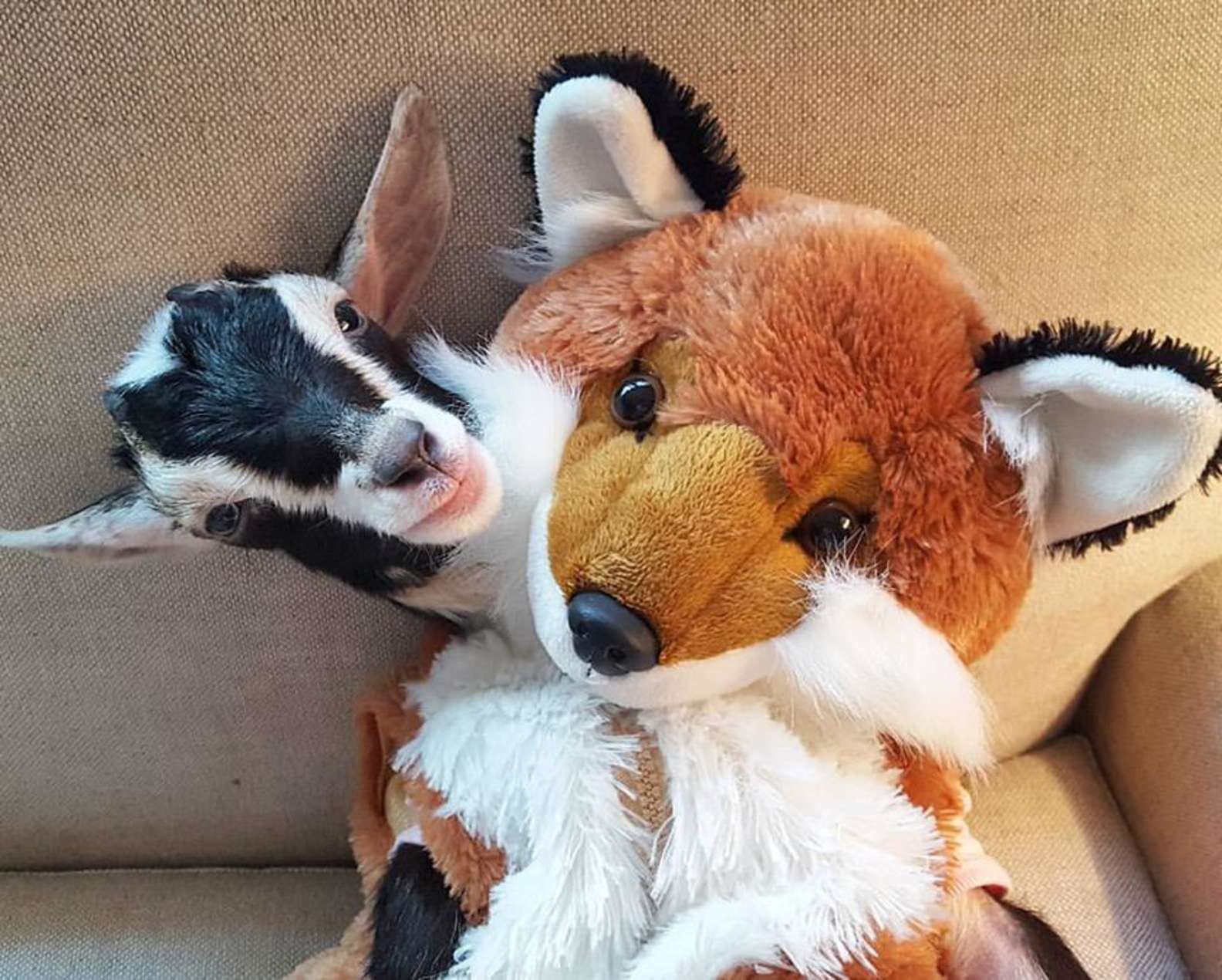 Polly might be small now, but Lauricella expects her to get a little bigger … and eventually outgrow her duck costume. “I’ve started regretting that I didn’t buy the next size up,” she said.

But Lauricella might have found a solution – another rescue goat named Pocket who arrived a few days ago and is handicapped. “When Pocket came home, I laid him on [Polly’s] back … and it just calmed her right down and she went to sleep,” Lauricella said. “It was almost like that duck costume. I’ve noticed that anytime he’s lying next to her, she just gets calm. I’ve never seen her do that with another goat here.” 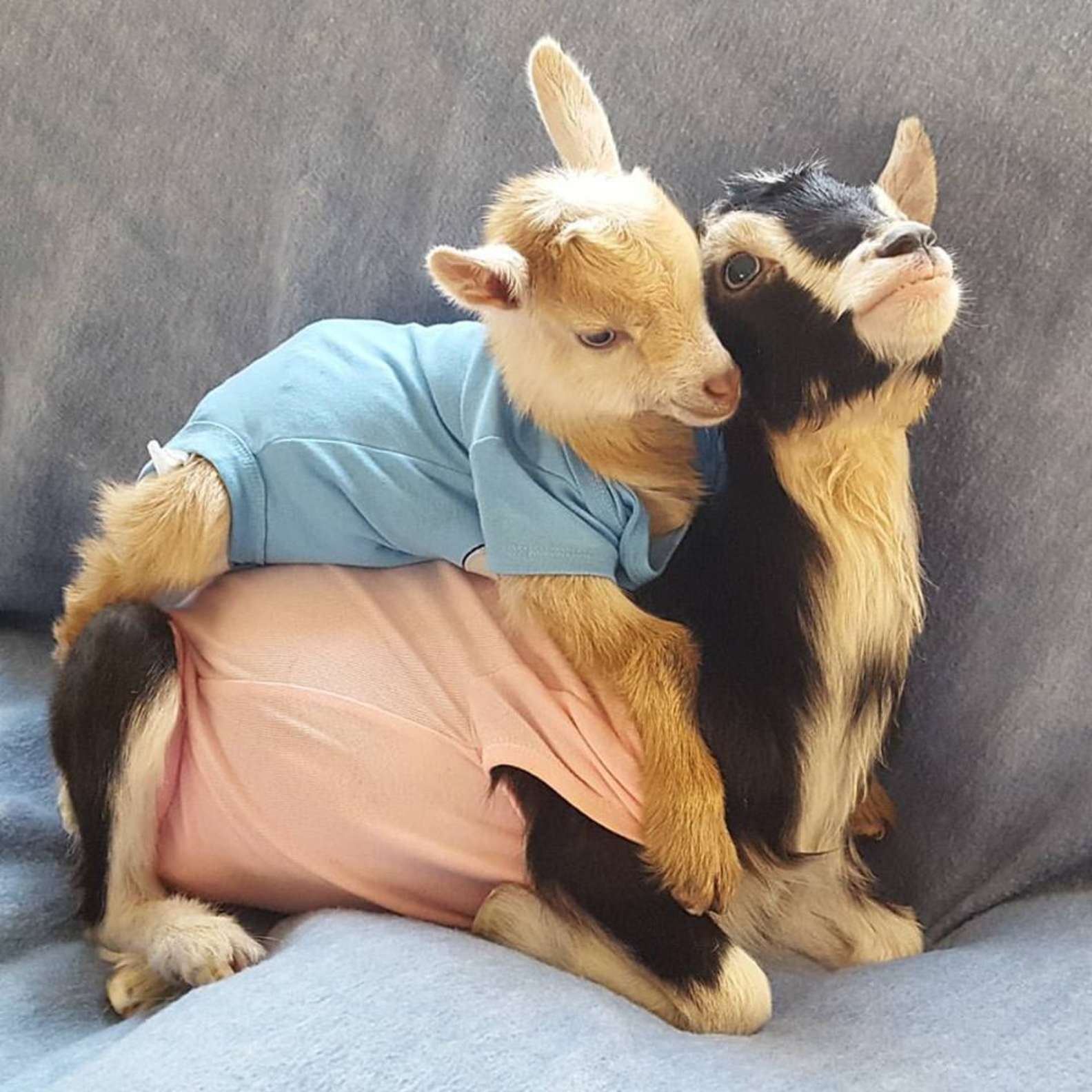 When Polly eventually moves outside, Lauricella hopes Polly and Pocket will continue to be best friends. “I’m hoping she won’t need [her duck suit],” Lauricella said. “I hope that Pocket becomes her duck suit.”