In most cases children do not want material things for the birthday but an animal.This is because they with their behavior to do for themselves, are fun and give love.This fact is shown in the emotional video below: a 13-year-old boy receives the long-awaited gifts from his deceased father.The video shows the birthday boy, Logan Kavaluskis,holding a small Boston Terrier puppy given to him by his cousin,Jon Kavaluskis.

This birthday surprise was actually planned out by his parents, before his father dies after a nine-year battle against multiple myeloma cancer. 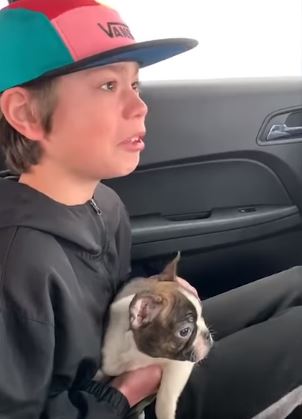 Logan had always wanted a dog of his own, however, his father was allergic so the family was never able to get one.With the help of Logan’s cousin Jon, the family found a healthy little Boston Terrier – one they felt was the perfect fit for the 13-year-old boy.
On his birthday Logan went out with his mom Melanie and his causin Jon to Hundsonville, Michigan to get a puppy but the boy did not understand anything that was for him. On the way home they stopped in a gas station and told Logan that they wanted a picture of him with the puppy. 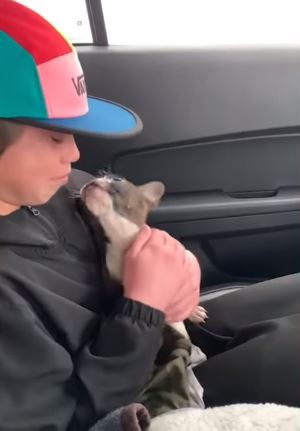 That is when Jon revealed the true. Logan can be seen crying when he’s told that the puppy is actually a birthday present from his dad. The puppy quickly began to befriend Logan: as soon as he took her in his arms he began to lick his chin and nose.

The sweet video ends with Logan petting his new best friend, whom he named Indy. Indy will always remain a beautiful birthday memory that will remind Logan how much his father loved him – and that would be the most precious gift everyone would want.