Firefighter Dan Estrada is a dog lover so when he came across a dog that was in distress, he didn’t hesitate to come to the dog’s aid. He and his friend Vincent Lopez were walking through the woods behind his home in San Lorenzo Valley, California with their dogs when they came across a dog that seemed to not be moving. When she heard the men approach, she was able to lift her head. “It really was a miracle,” Estrada told TODAY. 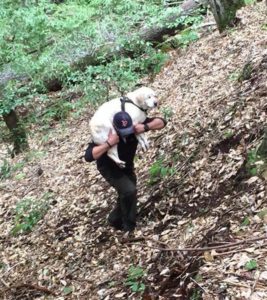 The dog was a 12-year-old blind Labrador named Sage who had been missing for over a week. The neighborhood was plastered with signs and her owners even had a professional dog tracker looking for her. “Our neighbors and other members of the community helped us search day and night for a week,” Beth Cole, Sage’s owner, told The Mercury News. “We looked everywhere.” The family was frightened for her wellbeing, especially since mountain lions are known to roam the area. Thankfully, they hadn’t gotten to her, however, hunger and exhaustion did. 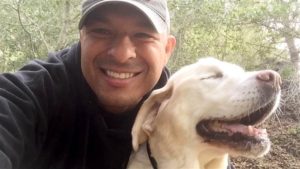 Estrada approached the dog and gave her a kiss. He knows Sage very well, she often plays with his two rescue dogs, a pit bull named Koelsch and a dachshund named Barnabus. She was very weak after being alone in the woods for so long, so he picked her up onto his shoulders and carried the dog up the hill. Estrada’s wife then contacted Sage’s owners who brought her right to the vet. After some rest, Sage was back to being herself.

The whole neighborhood was overjoyed to hear about her safe return. One neighbor cooked her a steak, while a welcome home party will be held for her at a local bar where money will be raised for the Santa Cruz County Animal Shelter.