“When I met him and saw how sad he was, I knew he was going to stay with me forever no matter what.”

Solo had lived on the streets of Los Angeles his entire life. When he was around 11 years old, he finally got too old and sick to run around the streets with the other dogs, and so he wandered onto a random woman’s porch and decided to stay there until someone came to help him.

The woman noticed the scared senior dog, living on her porch all alone, and decided to name him Solovino, which is Spanish for “he came alone.” After a few days had passed and Solo was still living on her porch, the woman contacted Rocket Dog Rescue, which agreed to take him in and flew him out to San Francisco. 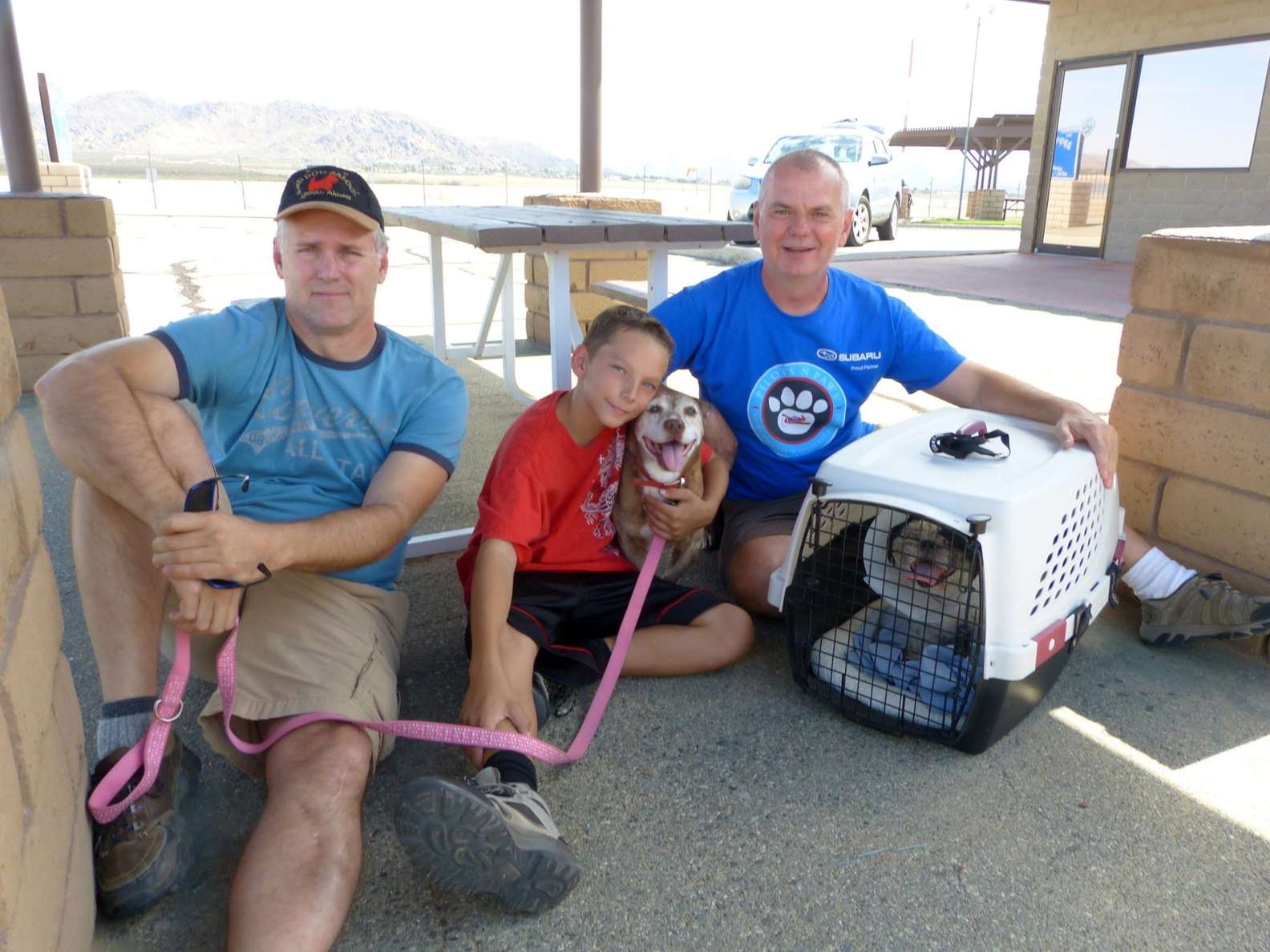 After arriving at the rescue, Solo was placed in a foster home, and stayed with various fosters for a year and a half. He was adopted out a few different times, but each and every time he was returned. No one could understand why the sweet dog couldn’t find a home that would stick, until finally, Carol Messina came across his picture online. 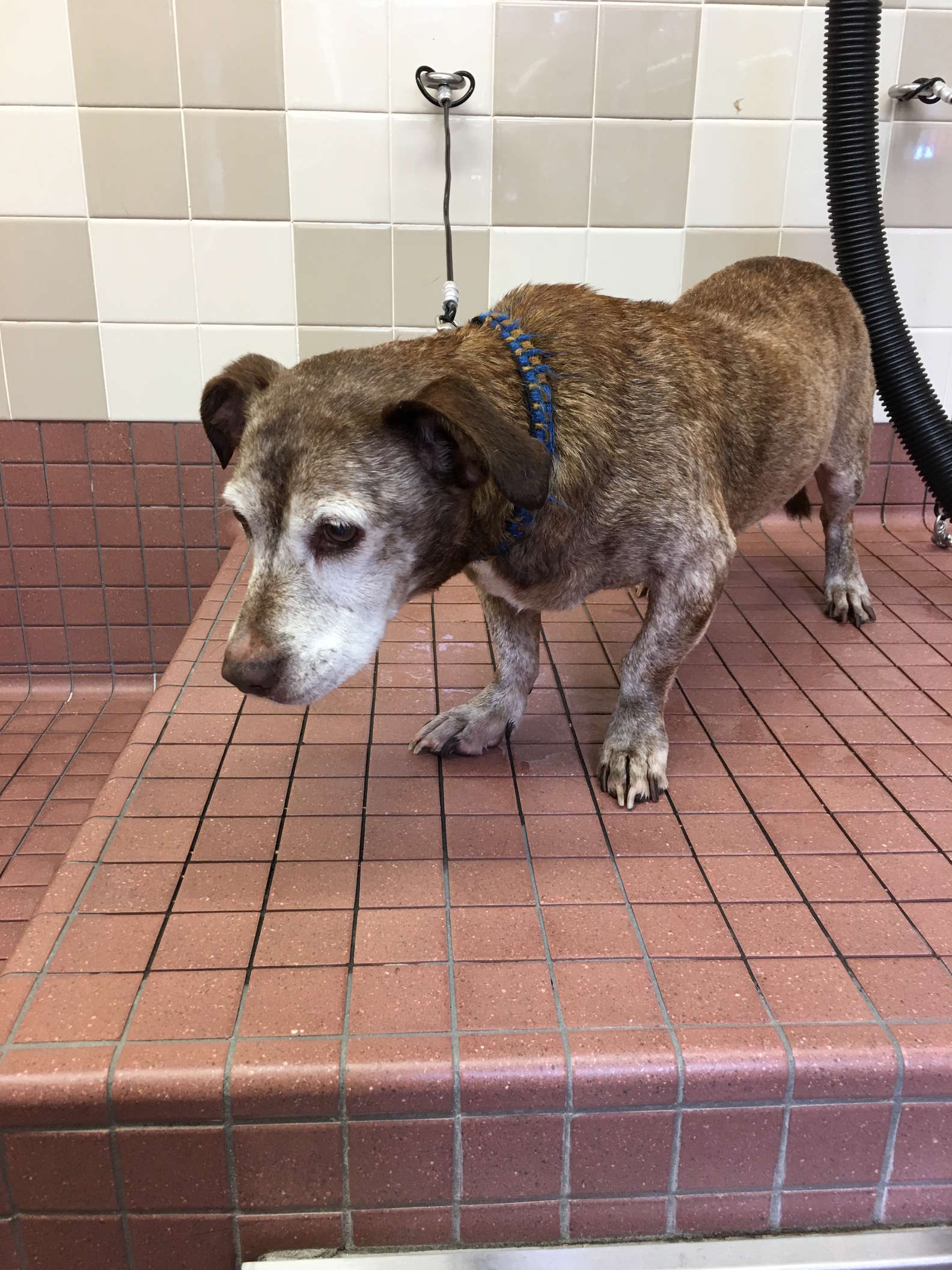 “As soon as I saw his face on their site, I wanted to love him,” Messina, Solo’s new mom, told The Dodo. “Then I saw that his name was Solovino, and being a HUGE ‘Star Wars’ fan (I have a cat with a ‘Star Wars’ name as well) I immediately thought, ‘Well, his name is Solo!’ Come to find out, that’s what his foster dad had been calling him! I knew it was fate. Then when I met him and saw how sad he was, I knew he was going to stay with me forever no matter what.”

When Solo first arrived in his new forever home, he was terrified and very shy. After living on the streets his entire life and then hopping around from home to home, he was very wary of people, and didn’t seem to trust that this home would finally be his last.

“When he first came to live with me, he kept his tail between his legs for months,” Messina said. “He was very non-reactive to dogs and people and cats, and flinched any time anyone tried to pet him. I very quickly learned that his hearing was MUCH worse than his foster thought, as were his teeth.” 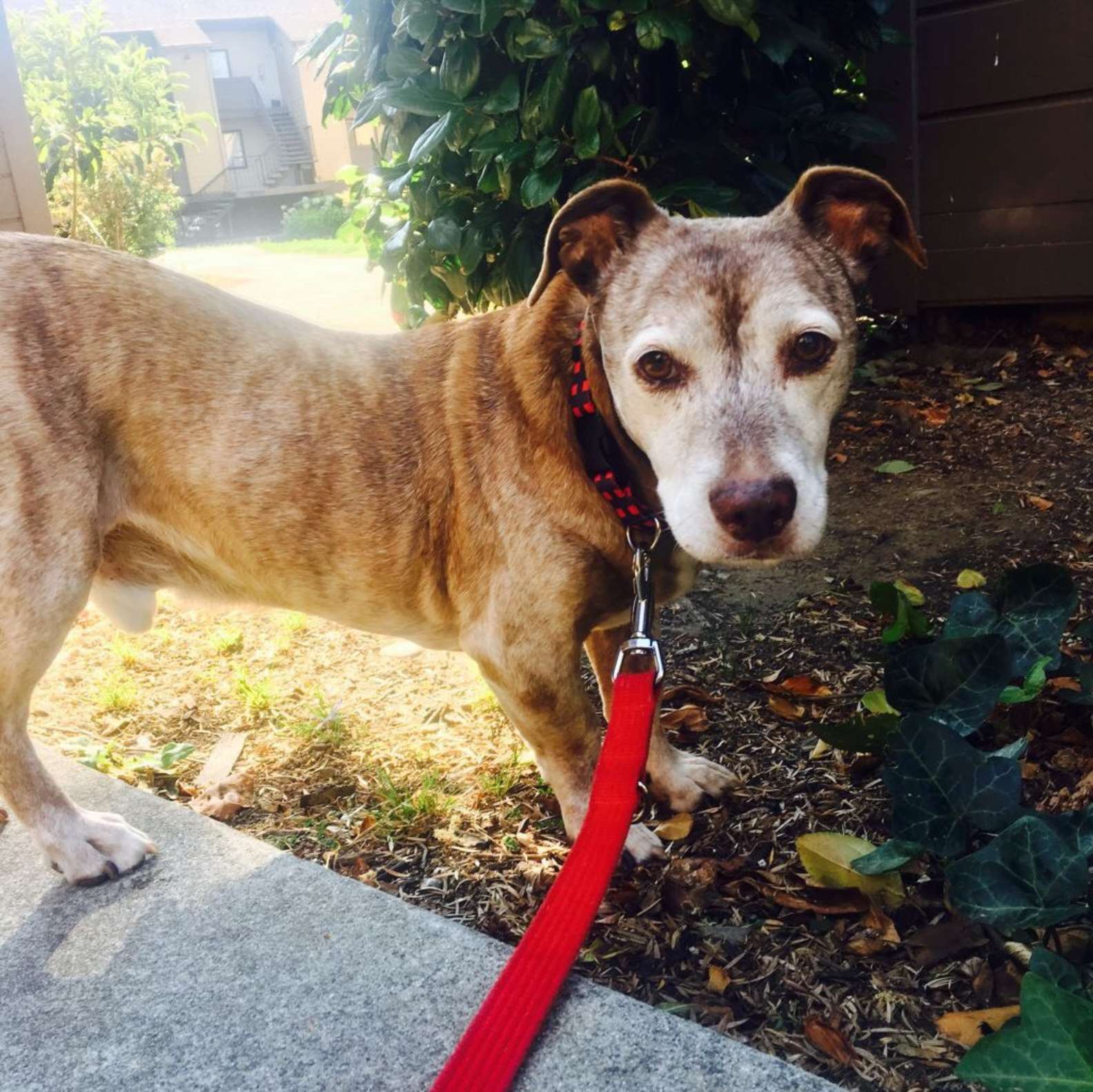 Since Solo was already very old and ailing, the rescue and his fosters hadn’t realized that he was basically deaf, and that his teeth were in very bad shape. Not being able to hear people approaching him was why he had so much anxiety being around people and being pet, and his teeth were causing him so much pain that it was hard for him to be excited about anything. His mom decided to postpone a small surgery she was supposed to have so that she could get Solo’s teeth fixed right away — and once they were, he suddenly became a completely different dog. 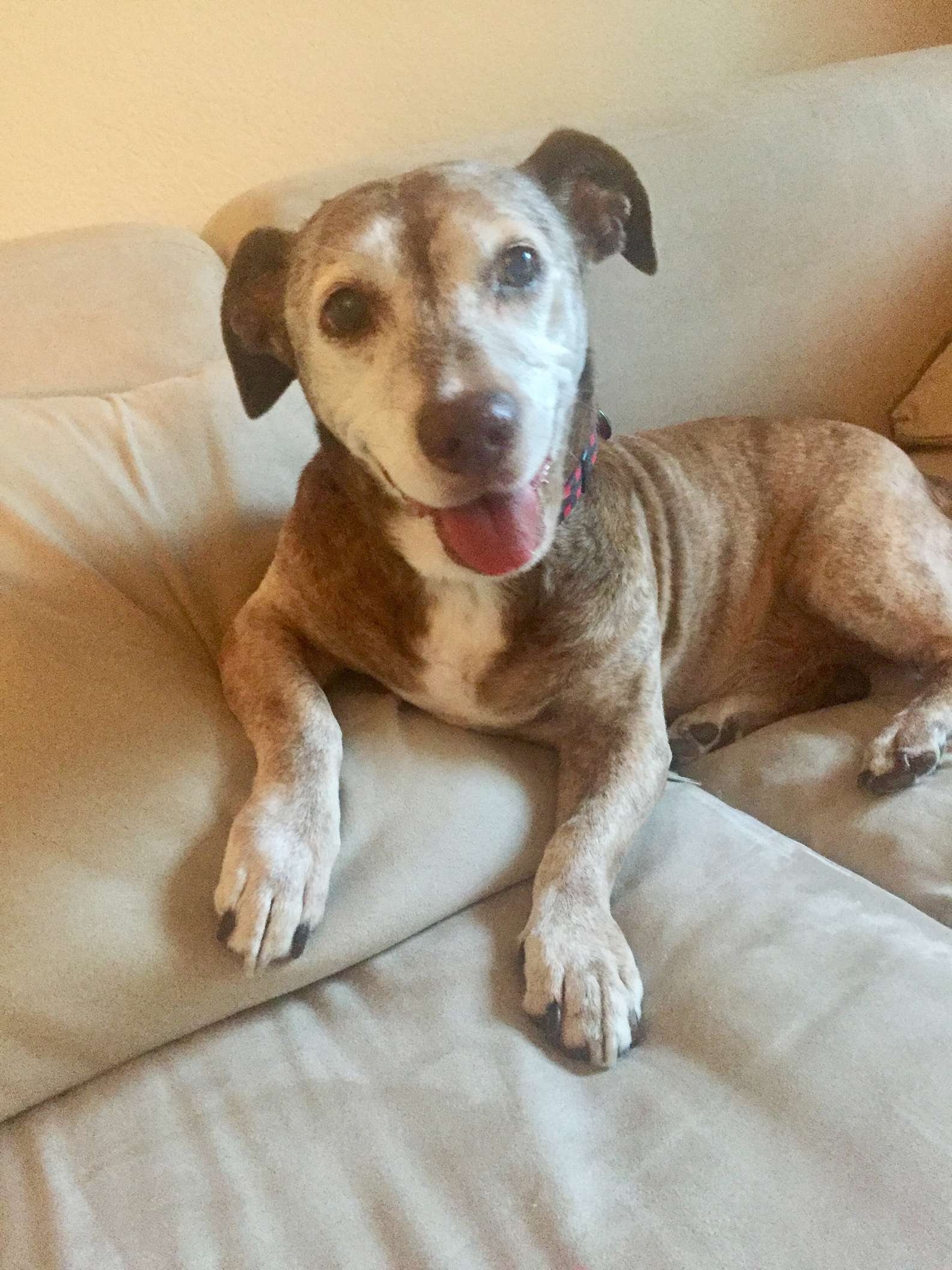 Solo now loves running and playing anywhere and everywhere, and even loves meeting new dog friends who happen to cross his path. He has a best friend named Bailey, who lives in the same apartment complex, and he runs all the way to Bailey’s apartment every time he goes to visit. He’s so much happier now, and seems to have accepted that this is his life now, and it’s never going to change.

“The people who live around us are always commenting on how he doesn’t even seem like the same dog anymore,” Messina said. “He didn’t smile or barely open his mouth even to pant for months, and now he smiles and rolls around and will run full-tilt across the lawn a dozen times a day.” 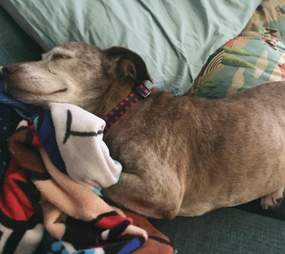 Messina also found ways to help ease Solo’s anxieties caused by his deafness. She now has him wear a harness that says he’s deaf every time they go out, so that people won’t pet him without asking. She always flicks the lights on and off when she comes into a room, so that he knows she’s in there and won’t get spooked if she comes up behind him. 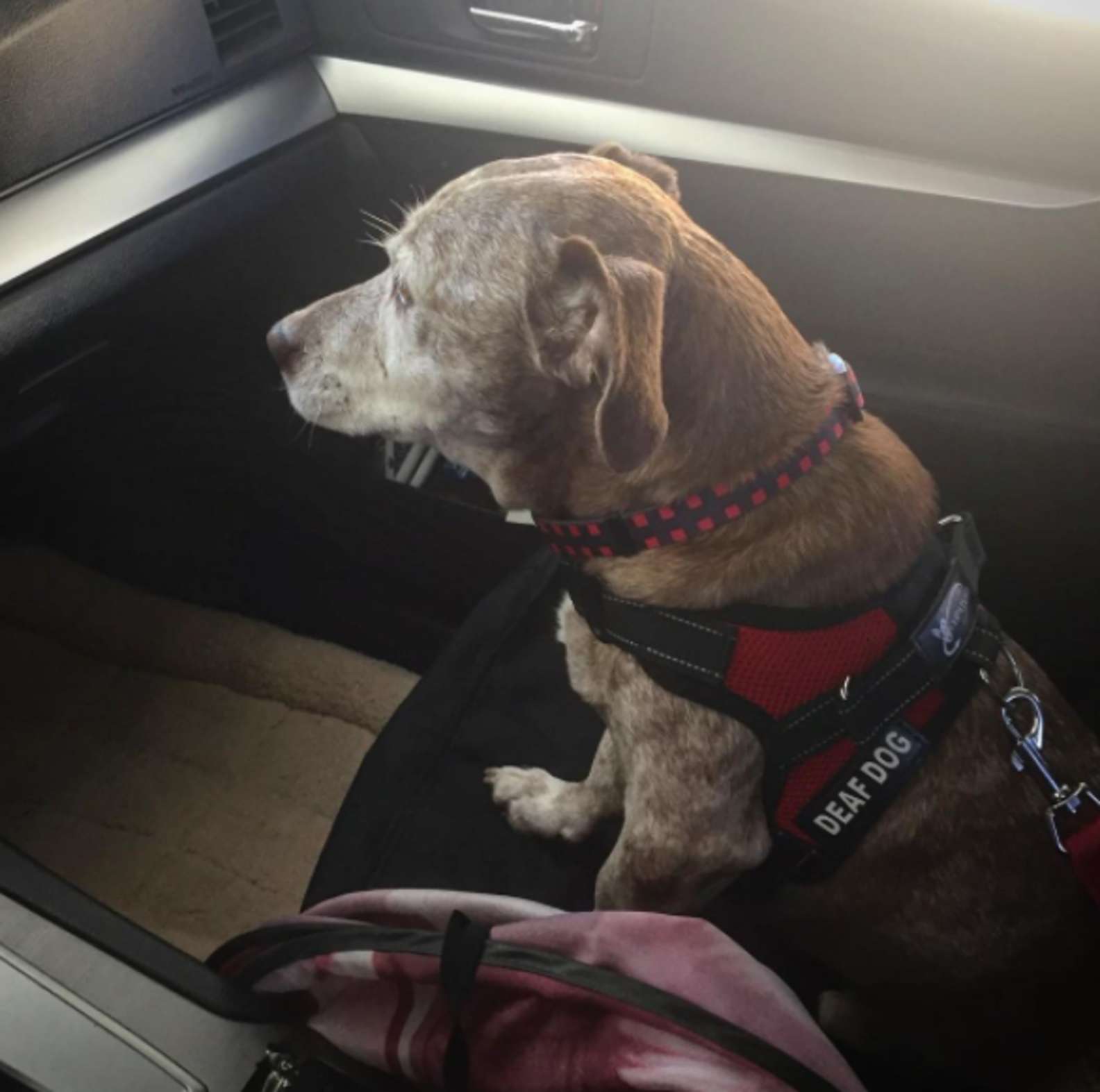 Solo has a lot of health issues, but he’s happy to live out his golden years with his new mom, enjoying every moment that he has left. His mom is even planning on moving to a new house with no stairs, so that Solo can get around more easily as he gets older — and so that she can adopt even more senior dogs in the future.

“I’m very proud of his progress,” Messina said. “It is the best thing I have ever done with my life, and he has inspired me to get more senior dogs who need hospice care.”